Appropriately named for the patron saint of music and poetry, the Hotel Saint Cecilia is an inspiring oasis in the middle of downtown Austin. Set on a secluded compound blocks from the South Congress shopping district, the hotel’s suites, studios, and bungalows blend rustic accents with colourful, pop culture-inspired modern flair; think black and white tiled floors, chrome and neon lighting, and retro rock’n’roll memorabilia. If you’re up for exploring, they have a fleet of bikes guests may borrow, or if you feel like staying in, browse the Saint Cecilia Library’s carefully curated shelves of books, films, and records – rooms come equipped with soundsystems (and goodie baskets stocked with local snacks). 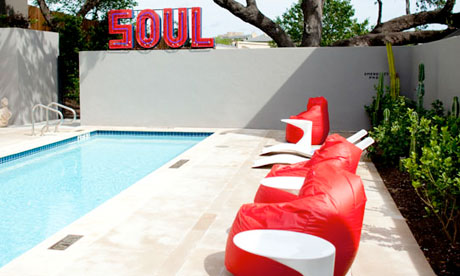 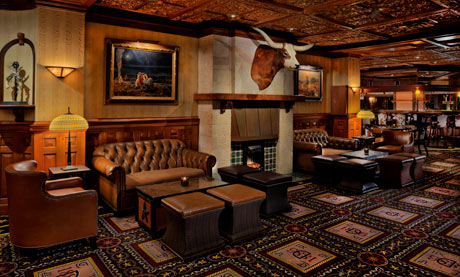 One of Austin’s oldest historic landmarks, The Driskill is known for its opulent marble lobby and leathered lounge – and the ghostly guests that are rumoured to haunt its halls. The romantically lit bar, with signature and seasonal craft cocktails and snacks, is the epitome of old-world style, lined with stately portraits (try a “Batini”, a vodka concoction made with hibiscus, named the official cocktail of Austin in 2010). Rooms range in size from converted former staff quarters to skyline-view suites; or, if you’re feeling fancy, there’s the famed LBJ Presidential Suite, designed for dignitaries but often occupied by A-listers. The hotel’s 6th Street-facing patios are perfect for people-watching and, when the sun goes down, you’re literally steps from the city’s famed entertainment strip. 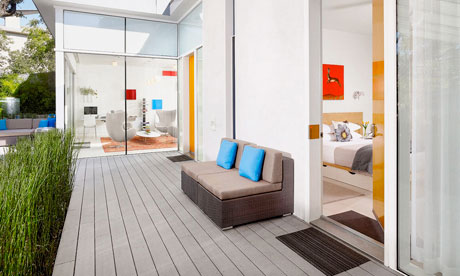 The Kimber Modern’s sleek, spare design makes it feel more like a dream home than a hotel, from the Eames furniture to the floor-to-ceiling windows and the expertly curated local art. Guests are given codes rather than keys for easy, automated arrivals and departures, and there are several rooms to choose from, including the Red Suite and the White Suite (which has a tub big enough for two and a private balcony). While it’s centrally located for South Austin adventures (and conveniently close to 24-hour diner Magnolia Cafe), the Kimber Modern’s daily happy hours, luxurious common areas, and oak-shaded outdoor loungers make staying in tempting. 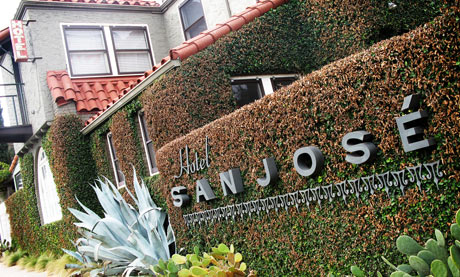 Photograph: Cheri Lucas/flickrThe first project from hotelier Liz Lambert (also of Hotel Saint Cecilia fame), the San Jose has earned international acclaim for its eclectic design and laid-back attitude. Like the Saint Cecilia, the San Jose offers innovative amenities: borrow a Polaroid camera or a vintage typewriter to create memories of your Austin trip, or an iPod loaded with the hotel’s favourite tunes, or grab a bike and head to nearby Barton Springs pool for an afternoon in the sun. Start your mornings next door at Jo’s Coffee, and don’t leave without hitting Home Slice for the best pizza in town. Though located in the heart of South Congress’s busiest blocks, the hotel offers plenty of privacy, making it a perfect urban retreat.

The Mansion at Judges’ Hill 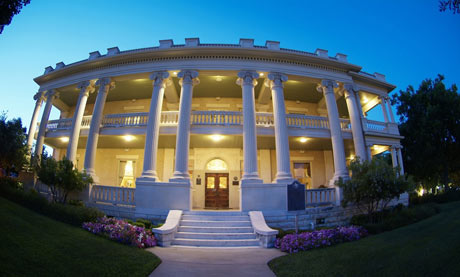 This breathtakingly elegant stone mansion dates back over a century and hosts scores of weddings and special occasions each year. Located just south of the University of Texas campus, with easy access to Austin’s nightlife and arts districts, the Mansion has lush decor and amenities, offering an array of suites including several cosy slope-ceilinged corner rooms. Enjoy cocktails on the columned, wraparound verandas, or elegantly hearty American fare at the in-house restaurant, one of the city’s best-kept secrets. 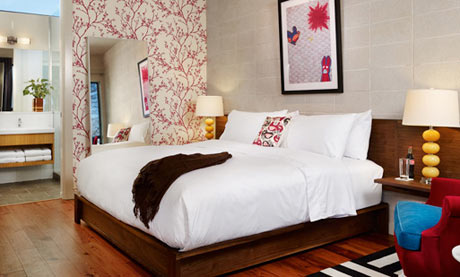 The Heywood Hotel is a recent addition to Austin’s rapidly growing East Side, quickly becoming the epicentre of the city’s indie art and music scenes (visit during the East Austin Studio Tour – the next one is on 10-18 November – when local artists open their spaces to the public for free). The hotel’s seven rooms are individually decorated with playful wallpapers, vintage-inspired upholstery, and eclectic prints complementing wood floors and massive full-length mirrors. Guests share access to the hotel’s bikes as well as an “internet jukebox”, plus an ultramodern common room and patio. The Heywood perfectly embodies the East Side vibe, and is the best base for exploring art galleries, food trailer parks, and dive bars – our favourites include The Yellow Jacket Social Club, The Grackle, and Rio Rita. 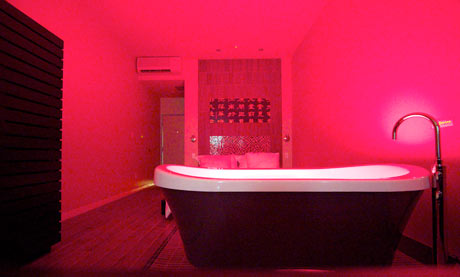 Don’t let the fact that it’s located right off the I-35 fool you – The Casulo, a quick car or pedi-cab ride from 6th Street, is a one-of-a-kind zen retreat, featuring an open, airy design and indulgent amenities, like oversized tubs in all its rooms. Enjoy an afternoon by the hotel’s pool or in its Asian-inspired cafe, or hop on a shuttle and be downtown in minutes; in the evening, check out the nearby Whip-In, an Indian eatery with an American twist (think Naan grilled cheeses and cardamom French toast, alongside traditional curries), featuring craft brews and local bands. 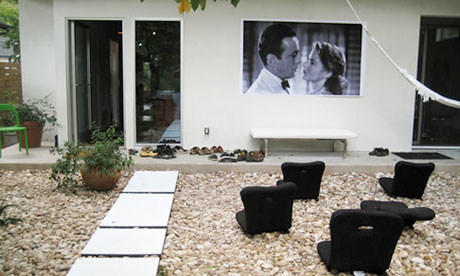 The Architect’s House is actually a trio of ultramodern homes designed by local Luciana Misi, downtown havens available for short- or long-term rental. All of Misi’s homes are certified five-star green buildings, with extra touches such as herb planters, roof gardens, landscaped grounds, and beautifully illuminated foliage tempting you to spend time on the private patios and outdoor dining areas. Try your hand at real Texas BBQ in the full kitchen or on the grill, or enjoy the built-in projection screens; at sunset, borrow one of the house’s bikes or kayaks and head to the river to see the Congress Avenue Bridge bats. 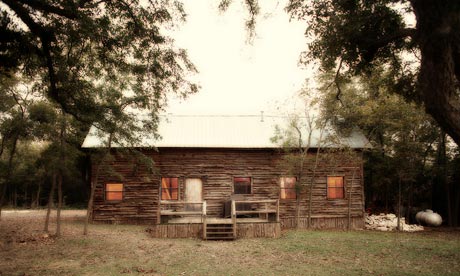 What’s more indulgent than a trip to your very own upscale ranch? The Austin Heaven Cabin, on 20 acres of land a few miles from the Capitol, puts simple, modern updates on traditional Old West style. Its intricate wood interior houses designer furnishings and perks such as a claw-foot tub, a record player, and a projection screen, plus a full kitchen and plenty of space for socialising. The cabin is the perfect central spot for daytrippers who want to explore attractions such as Krause Springs, Hamilton Pool, or Gruene Hall – and the porch’s rocking chairs are the ideal place to enjoy a Texas-sized sunset. 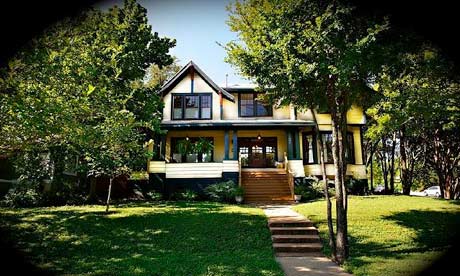 The Gateway treats every guest like a star, from the welcome baskets stuffed with locally made treats and luxe bathrobes to the included breakfasts, served wherever you’d like – even by the pool. Each room’s decor is unique, with lush Old World-style, airy layouts, modern fixtures and local art on the walls. The chefs at the Gateway have published their own cookbook, and often offer “food adventures” – such as BBQ tours and wine pairings. Located in trendy Travis Heights with easy access to the hike and bike trails along the Colorado River, plus Festival Beach, Guerrero Park and South Congress Avenue’s vintage shops and food trailer parks.

END_OF_DOCUMENT_TOKEN_TO_BE_REPLACED

Experience A New Level Of Luxury At Trump International Tower